My first book which was published in 2006 by Robert Delpire in Paris. Most of the work in this book was done from the time I arrived in Paris in 1998 to shortly before the publication, pictures taken in Paris, Rome, Amsterdam, the States, Seoul, and a few other places in between. It was Delpire who came up with the title, Là ou Ailleurs. In English, it’s “Here or Somewhere Else”. When I asked Bob (as people who knew Delpire called him) the meaning of this title, he said, “Both you and your pictures are neither here nor there. You’re a rootless gypsy floating here or somewhere else looking for a place to land.”

As a young man in New York trying to find my way in photography, two books were my Bible that I turned to regularly for inspiration:  Robert Frank’s “The Americans” and Josef Koudelka’s “Gypsies”. Prior to Bob proposing to publish this book in 2002, I had gone through three years of frustrations with three publishers in France and one in the U.S. It never occurred to me that the man who had published these seminal books that had meant so much to me would one day publish a book of my own work. I think it’s pretty safe to say that had I not gotten support from Bob, I would have packed up and returned to New York…and who knows how my life would have turned out then.

Bob asked Alain Jouffroy, a great poet and art critic (who passed away in 2015), to write the introduction to this book. When I first met Alain, he studied attentively the book dummy put together with cheap laser photocopies. Alain was kind of a mystic who knew how to penetrate the layers of people and things and grasp right away what is essential. This is an excerpt of what he wrote:

“…Look at this landscape where there is no one, and which cuts the world in two:  above a cloudy but clear sky, below a large horizontal wall, on which the shadow of a large tree is projected. The two implacable — tragic and beautiful — of the same world.” 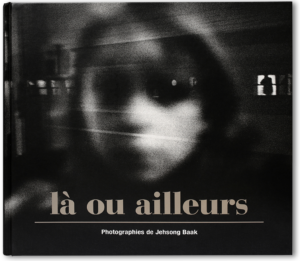